When I was young, my Quaker mother Wilma (1920-1997) subscribed to the newsletter A Minority of One. It arrived in our mailbox, somehow escaping the eagle eyes of neighbors and the mail carrier. Many people didn’t understand the term “bearing witness” back then. Many still don’t.  Bearing witness involves making a commitment to a social issue (also known as a “leading”), testing it to make sure it’s realistic and not ego-based, and then following it through to a logical conclusion. Then one bears witness to these issues and the associated social change.

My mother believed in the concept. Bearing witness and being a minority of one came easily to her. She would have been pleased to see the idea spreading around the world today.  She also understood that her own mother—suffrage activist Edna Buckman Kearns—also believed in bearing witness to numerous issues she was concerned about.

Edna is best known for her New York State voting rights activism at the turn of the 20th century and the Spirit of 1776 suffrage campaign wagon now in the permanent collection of the New York State Museum in Albany, New York. Edna’s and my mother’s insistence on bearing witness created a strong foundation for their descendants to do the same.  As the expression goes, we stood on their shoulders and reached for the stars.

The term bearing witness has entered the mainstream now, though previously it barely gave permission to my mother to be an eccentric and stand relatively alone when facing multi-layered and complex social issues. She considered herself a minority of one in the 1950s and 1960s, while questioning the impact of above-ground nuclear testing and how it affected the purity of the milk her five children poured on their morning cereal.

Bearing witness was also behind my mother’s compulsive saving and storing of our family images, memorabilia, artifacts, anecdotes, and short stories. The artifacts she saved connected to my grandmother’s role in the struggle for voting rights ended up in my 2021 book from SUNY Press, An Unfinished Revolution: Edna Buckman Kearns and the Struggle for Women’s Rights. It’s a New York State story reflecting the hundreds of national voting rights organizations made up of volunteers working on the local, state, and national levels. Voting rights are as relevant now as in the past.

An Unfinished Revolution tells the story of the work my grandparents did together to improve a process they acknowledged could easily be contaminated.  My grandmother was a Philadelphian and ninth-generation Quaker in the U.S., though my grandparents came to live in New York City and Long Island. My mother and grandparents weren’t famous or particularly special, except in their commitments to action and bearing witness. Edna and her husband Wilmer Kearns modeled what can happen when social activism becomes a family affair. They stood on the shoulders of those who came before them and passed the spiritual and activist torch to others who carry on the work today.

Edna became a grassroots activist and doggedly worked for more than a decade for voting rights, peace, prison reform, and other social issues she considered urgent and critical. And she bore witness to equality and the necessity of collaboration. She supported the type of working together so critical today. She never received a salary, and she canned, sold produce, and raised money for the cause. When she advocated for “freedom,” she spoke of a sisterhood of ALL women. She understood that she couldn’t end racism, prejudice, and discrimination by herself. The process had to include many different types and backgrounds of individuals who would then pass the torch to another generation to finish the work.

The supporters of voting rights in my grandmother’s day didn’t speak with one voice. They had fierce arguments about strategy and personal opinions. But they agreed on one thing: Women wanted the right to participate in the affairs of their communities and nation. They started as far back as the creation of the nation and persisted nonviolently to advocate for the right of ALL citizens to vote.

This diverse group of volunteers wouldn’t give up in spite of a social structure controlled from the top down. They spoke from soapboxes in the streets. They lobbied elected officials who could vote—all men. They organized state by state and later held out for an amendment to the U.S. Constitution. They understood that the right to vote would involve generations of activists. That’s why the title of my book refers to an unfinished revolution: The job has yet to be finished.

Their example established a momentum impacting four generations of activists in one branch of my family. They were regular folks with strengths and weaknesses, plus plenty of diversions I now call secrets and legends. This is what my book is about. Activism is more than accomplishments. There’s an elusive spirit involved in bearing witness. As the granddaughter of Quaker voting rights activist Edna and Wilmer Kearns, I attended and graduated from a Quaker secondary school in Pennsylvania on scholarship. So did my siblings. When others ask why I am the way I am, I answer with only a few words: “I’m bearing witness to equality and freedom, something much larger than myself.” I then return to my quiet pursuit of watching, remembering, and documenting, as well as testing my own understanding and taking action.

My grandparents received a torch of activism and freedom from the early women’s voting rights activists. They passed it to my mother, and my book is a gift of activism and freedom to others. We are all in a position to bear witness to those who otherwise may fall through the cracks or go unnoticed in the broader telling of American history. All of us have a responsibility to tell and pass on our own personal family stories and legends. Over the years I’ve heard innumerable individuals saying, “I wish I had asked my relatives about x, y, or z.” And, as I write this in the context of an international pandemic, individual and family stories are disappearing. We may pass on money or land or objects to our descendants, but in my opinion the greatest gifts are the personal values and stories that beg to be recorded and shared.

We can and should bear witness in our own lives and the lives of those we love. Storytelling is real and powerful. And the future of our small planet depends on all of us bearing witness, even when doing so might qualify us as a minority of one.

Marguerite Kearns grew up in the Philadelphia area learning about her family history. A former journalist and teacher, her award-winning writing has contributed to a support base for her storytelling. She lives in Northern New Mexico. More about An Unfinished Revolution can be found here or in this video. 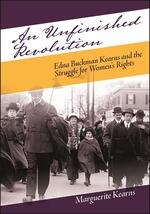 Edna Buckman Kearns and the Struggle for Women's Rights