Anyone who has ever lost a beloved parent has undoubtedly wished for just one more moment.

My dad, Robert R. Meehan, was larger than life, at least as far as my seven-year-old brain was concerned. That’s how old I was when he was elected District Attorney of Rockland County, New York.

To seven-year-old me, Dad was a cross between Superman and Batman. He fought for truth, justice, and the American way, but he also got to drive a pretty cool car.

When Dad died in 2004, he was 73 years old. My admiration for him had evolved, but never waned. And I found myself missing his voice, his self-deprecating wit, and his slightly high-minded sermons on the responsibility of citizenship.

That was when an old brown paper bag filled with my father’s papers was discovered in the office of my uncle, Broadway writer Tom Meehan, who had passed away 18 months earlier. While the bag had moved to different locations over the years, apparently its contents had not been disturbed in about four decades.

The bag was filled with Dad’s familiar yellow legal pads with musings about many of the milestones of his early life. But at the bottom was the real treasure: a bound manuscript called The Hayseed DA, by Robert R. Meehan. It was all about the highs and lows, triumphs and challenges of his nine years as District Attorney.

Although I had heard my parents talking about this book back in the 70’s, being a typical, self-absorbed teenager who was more interested in boys and movies, I never thought to ask about it. After Dad died, I began wishing I had.

Now, 15 years after his death, I was holding it in my hands. Reading the manuscript was one of the great joys of my life. Reliving some of the many dramatic moments of those years, including an assassination attempt on my father’s life and a horrific train-bus crash that claimed the lives of five high school students, was like traveling back in time. There he was again, my young father, all of 35 when he was elected DA, able to leap tall buildings in a single bound.

The manuscript was also filled with family stories to cherish and compelling accounts of heinous crimes and courtroom dramas that I never knew about. And they were all told in my father’s uniquely wise, aw-shucks voice.

As I read the manuscript, I adored the stories he told and was anxious to share them with all who loved my dad. But I could also tell that it needed work. I later discovered letters from publishers. They agreed that the stories were wonderful, but the book needed significant input from a professional writer.

As it happens, I grew up to be a writer, specializing in speeches and communications documents. And so I decided, as a final gift to Dad, to give it a try.

With the help of my siblings and others, I spent the next two years digitizing and editing the manuscript, which I renamed Confessions of a Hayseed DA. I explored newspaper archives to research the cases my father described and I interviewed a few of the surviving people who played key roles in the stories he told.

A friend suggested that SUNY Press might be interested and, as a graduate of SUNY Binghamton myself, I was excited to reach out to them.

I am beyond grateful to SUNY Press for helping me to give this one final gift to Dad: 18 years after his death and 44 years after he wrote the manuscript, Robert R. Meehan will not only be a superhero (at least to me), he will be a published author.

Kathleen Meehan Do is a communications specialist who has served in the administrations of New York Governor Mario M. Cuomo, Pennsylvania Congressman Joseph Sestak, and Rockland County Legislature Chairwoman Harriet Cornell, as well as college presidents in New York and New Jersey. 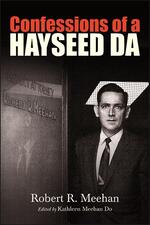