Mark Berger lived most of his life near Prospect Park in Brooklyn. He has driven a potato truck, been a real estate agent, and worked as an elementary school teacher and guidance counselor. In 2012, attending a memoir writing class, he found his voice as a storyteller and discovered a memory trove of tales from his life in the 1960s that were demanding to be told. He and his wife, composer Rain Worthington, live in rural Nassau, New York. 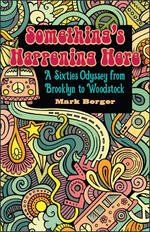