Chonggi Mah, a beloved poet of Korea and a retired medical doctor, has written over ten collections of poems and prose. Eyes of Dew was translated into English and published by White Pine Press in 2006. He has garnered numerous literary awards, and is acknowledged as one of the major modern Korean poets. Youngshil Cho has won several grants for her translation of modern Korean poetry books and children's books. Her publications include One Day, Then Another by Kim Kwang-Kyu (White Pine Press, 2013), A Warm Family by Codhill Press (2014), A Lion at Three in the Morning by Nam Jin-Woo (Homa & Sekey Books, 2017), Whisper of Splendor by Chong Hoyn-Jong (Homa & Sekey Books, 2018), and Paper by Shin Dal-Ja (Codhill Press, 2018). 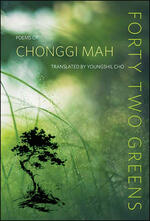