With hate crimes on the rise and democracy in crisis, the literature we study in schools has new purpose. Discussing books with young people doubles as a gesture of resistance. At this moment, the great activist writers seem greater and affect us more powerfully.

But of all the readings I used in my university classes this year the most relevant was an unpublished play by an author largely erased from literary history. Song for Roosevelt is an agitprop drama by communist writer Mike Gold, who became famous in 1930 for his bestselling novel Jews Without Money and stayed famous through the “red decade” of the Depression. Gold was later blacklisted. By 1953 the only job he could get was handing out towels at a leftist summer camp while his wife waited tables in the camp restaurant.

While working on my recent biography of Gold, I found Song for Roosevelt in his archived papers at the University of Michigan. The script was completed in 1948 in France, where the author self-exiled because the Cold War was closing in and he foresaw the McCarthy era’s persecutions. After transcribing the manuscript I realized that Gold also foresaw what’s happening now.

Song for Roosevelt reminds us that American fascism is a deep-rooted phenomenon and offers guidelines for opposing it. Though Gold’s characters suffer intimidation that is both race-based and class-based, they ultimately find hope in community-based democratic activism led in a significant way by women.

The drama is set in the neighborhood Gold knew best, Manhattan’s Lower East Side. The action begins on April 12, 1945, the day of Franklin Roosevelt’s death. The spokespersons for the playwright’s message are two resilient young women who’ve lived through separate tragedies in the fight against fascism: Theresa is a 26-year-old war widow and single mom, her husband killed in the 1944 battle against Axis forces at Anzio. Hannah is a refugee from Nazi Germany whose entire family—parents and two siblings—died in Hitler’s gas chambers. 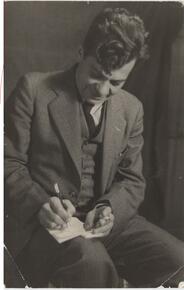 Adopted by the Shuster family, Hannah had arrived in New York severely traumatized, “afraid of every cop in the street” and panic-stricken when left alone. She enters the play as “a vivid, rather shy girl of 20, carrying books and flowers” but also bearing a question many are asking today:

"I can see America is different from Germany. It could never be another Germany. Just the same, fascism is growing here, also. How can that be?"

The answer to Hannah’s question follows from a depiction of New York social history. One of the forces Gold addresses is the Christian Front, an organization (composed mainly of followers of radio priest Charles Coughlin) that fomented violence against Jews. In 1945, anti-Semitic attacks were frequent enough to become the subject of an Oscar-winning short film, The House I Live In, starring Frank Sinatra and written (by leftist screenwriter Albert Maltz) to counteract the brutality.

Early in the play, anti-Semites emboldened by Roosevelt's death attack a barbershop co-owned by Hannah’s adoptive father, Louis Shuster, after which the elderly man collapses from a stroke.

Months later Louis’s son Bernie, 25, returns from the war against Hitler to learn that his father is comatose. He vows to avenge the assault, but Hannah pleads with him to forego this plan and recommit to his ambition of becoming a great chemist.  One way to defeat intolerance, Hannah knows, is to live a meaningful life.

While in Europe, Bernie too had witnessed the horrors of the concentration camps. Realizing that even New York is unsafe, he weighs questions about how democracies die: “How can we end the Christian Front and Blackshirts in New York? What protects them in a democracy?” He says he can't understand the dismissive attitude of politicians toward violent hate crimes.

“It was like that in Berlin,” Hannah responds ominously.

“And the South, too,” adds Randy, an African American porter who dreams of becoming an inventor. He relates the story of his father’s lynching, after which the police arrested his mother rather than the white murderers.

In the play’s last scene, a neighborhood meeting is held in the kitchen of the Shuster tenement. Before it begins, Max Gottlieb, Louis’s partner in the barbershop, wearily reminds everyone that, as “a bunch of nobodies,” they are no match for the fascists.

Theresa enters, “dressed for a summer night, a flower in her hair,” and confidently outlines a plan: “forget the big shots and appeal to the people of the neighborhood. Organize them.” Max calls this strategy “childish,” but Theresa is unfazed and offers specifics:

"Parades, mass meetings, pressure on the politicians—the whole works—the same things we did to fight the black market and elect Roosevelt. Organize the people, and everything else will begin. It’s like unlocking a big dam, freeing the water so it comes rushing down to turn the big dynamos that make power and light for the world!"

Cold War critics never forgave Gold his communist views. He probably knew no audience would ever hear Theresa's speech, at least in his lifetime. But when my classes studied the play this year, its lessons resonated. One student wrote, "The strength of Song for Roosevelt is its message of empowerment, the encouragement to unite and fight against tyranny."

The timing seems right for Gold’s message. Something Hannah says in Gold’s play makes this more certain. When Bernie vows solitary vengeance for the assault on his father, Hannah challenges him to see the bigger picture: “You are a Hamlet and want to avenge,” she says, “But Hamlet is an old story. It does not fit our time! It is too personal. It does not seek the causes of the murder, the causes of fascism, and fight that!”

Only through collective action will today’s fight against fascism get anywhere. And as Hannah implies, our models aren’t always found in navel-gazing art, or in escapism, or in poets who only poeticize. Instead, we should be talking and teaching about activist writers and people’s poets, because the clock is ticking.

Recently there appeared in The Nation a book review of Michael Gold: The People's Writer that began with the right question: "Is it time to release Michael Gold from his personal gulag to range free in the pastures of 20th-century American literature?"

Song for Roosevelt will appear in print for the first time later this year, in a new anthology of Gold’s writings published by SUNY Press.

(A version of this piece has already appeared at People's World and is reproduced here with permission.)

Photos provided with permission from the Granich Family

Patrick Chura is Professor of English at the University of Akron. He is the author of Michael Gold: The People's Writer and Thoreau the Land Surveyor and Vital Contact: Downclassing Journeys in American Literature from Herman Melville to Richard Wright.