When we started to write our book Plantation Politics and Campus Rebellions: Power, Diversity, and the Emancipatory Struggle in Higher Education in 2015 during the Movement for Black Lives, we felt emotions later mirrored by many throughout the 2020 uprisings against police violence—rage, frustration, helplessness, sadness, and determination. As faculty of color at predominately white institutions, we sought to document the changes taking place during widespread student-led campus rebellions, while marking the white supremacy and anti-Blackness that incessantly fuel the inner-workings of higher education.

In this book, we use “plantation politics” to refer to the connections between historical policies, practices, and discourses in higher education and their new iterations, which are used to control, exploit, and marginalize Black people in the everyday life of the academy. Specifically, we argue that plantation politics are often pushed to the forefront when institutional actors are confronted with Black people’s resistance, such as during the Movement for Black Lives.

Teasing out a plantation politics framework has helped us identify white supremacy’s influence as institutions seeking to tackle inequities often end up perpetuating them by not directly addressing the root(s) of the problem. This may be familiar to those who observed endless anti-racist and solidarity statements generated in light of pandemic-era protests, while noting the lack of economic resources and structural change universities offered to actually address racist practices that exploit, surveil, and kill Black people (mentally and physically).

Accordingly, the authors in Plantation Politics and Campus Rebellions examine who and what the barriers are to humanizing processes within higher education, and how an understanding of plantation politics might help us more effectively imagine and organize toward emancipatory futures. Collectively, we take seriously Black people’s vernacular description of universities as “plantations” in order to tease out old and new dehumanizing practices and ideologies that universities implement to be profitable in the business of teaching, learning, and research.

To be clear—in this book we are not arguing that universities are actual plantations like those of the Antebellum South, nor are we arguing that Black people in academic institutions experience the type of physical, sexual, and psychological horrors our ancestors endured. We will never know the violence of being treated solely as chattel, as a subhuman commodity, or the terror of such enslavement.

Overall, it is our hope that readers will see how the technologies used to create plantation life are connected to those that sustain higher education, and the ways these produce racial inequities and hostile environments that give rise to campus resistance. Each section of the book addresses an instrument of plantation politics in the contemporary university, recognizing that these instruments and the forms of resistance that occur in response to them are all interconnected. Subsequently, there are connective threads running through the three sections.

Part one of the book, “Capitalism and Colonial Vestiges of White Supremacy in Higher Education,” discusses how education continues to be a vehicle of social control that exploits Black people while upholding whiteness, white supremacy, and anti-Blackness.

Part two, “Institutional Rhetoric and the False Promise of ‘Diversity’ and ‘Inclusion’,” makes the case that instead of serving as a gateway to racial equality or justice, universities frequently design diversity and inclusion initiatives that center and reinforce whiteness while neglecting race and racism. This often works to protect universities from critics concerned with the lack of progress.

Finally, in part three, “Resistance and Repression: Campus Politics and Legislative Acts of Anti-Blackness,” authors describe resistance students and instructors engage in as they call into question higher education’s commitment to equity, and the policies administrators and government entities create in order to repress campus rebellions.

In spite of the reality of plantation politics, this bookprovides some insight into how Black change agents and their allies might begin to imagine emancipatory practices within higher education.

For example, authors point to the importance of employing radical pedagogical frameworks that connect the mind, body, and soul. These transformative and inclusive pedagogies, combined with culturally relevant curricula, can lead to the creation of educational experiences that nurture Black people instead of dehumanizing them. Moreover, they make possible the opportunity for Black folks to possess the critical political literacy necessary to navigate the destructive instruments of plantation politics identified in this volume.

Authors also call for an antidiversity movement in which universities move away from their false promises of inclusion and begin to reimagine new concrete modalities of praxis that result in racially inclusive and equitable campus environments. For this to happen, academic institutions will need to ensure that all of their employees, not just their diversity workers of color, have the capacity, skills, knowledge, and courage to support the development of antiracist campuses.

Finally, this book indicates that if we have any chance of destroying instruments of plantation politics, campus leaders and external stakeholders must be dedicated to not repressing campus rebellions and instead, embrace resistance as a diagnosis of what is not working—a beacon lighting the way to a more just and equitable future. Plantation Politics and Campus Rebellions provides a conceptual framework illuminating how plantation politics are prevalent in higher education institutions today, while acknowledging the physical and emotional costs Black people experience when moving toward more equitable futures.

Bianca C. Williams is Associate Professor of Anthropology at the Graduate Center, City University of New York and author of The Pursuit of Happiness: Black Women, Diasporic Dreams, and the Politics of Emotional Transnationalism. Frank A. Tuitt is Vice President, Chief Diversity Officer, and Professor of Education at the University of Connecticut and coeditor (with Chayla Haynes and Saran Stewart) of Race, Equity, and the Learning Environment: The Global Relevance of Critical and Inclusive Pedagogies in Higher Education. Dian D. Squire is Associate Professor and Associate Dean for Inclusive Excellence at the Loyola University Chicago School of Nursing. 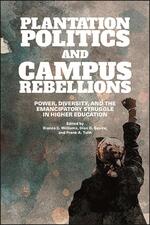 Power, Diversity, and the Emancipatory Struggle in Higher Education