Recent controversies about drag queen story times--events where drag queens read stories to children, often at public libraries--illustrate how certain types of humor, such as camp, can help us better understand social conflicts about sex, gender, race, and identity. Drag is a performative art form in which people dress up as characters who often embody exaggerated versions of gender. These characters are often modeled on celebrities and other figures of femininity or masculinity from the mass media. Drag usually involves elaborate makeup and costumes and can involve singing, lip-synching, and dancing. It is always humorous, and the specific type of humor that it engages in is known as camp.

While camp is notoriously difficult to define, it's generally understood as a sensibility based on the performance of intentionally kitschy bad taste. Its main effect is to highlight the opposition between appearance and essence in everyday life. A central aspect of camp humor is gender parody, the exaggerated masculinity or femininity that I mentioned above. Historically, most  drag queens have been gay men who have dressed as female characters, thus embodying the opposition between their biological sex ("essence") and the gender they enact ("appearance"). For gay male drag performers, this can be understood as a metaphor for their sexuality, since mainstream society associates attraction to men with femininity and women. The same can be said for many drag kings, who are often lesbian women who perform masculinities. This contradiction between "appearance" and "essence" is the basis of camp humor--the perception of the incongruity of a sexed body doing the "wrong" gender.

Current objections to drag queen story times hinge mostly on the conservative belief that children should not be exposed to such gender nonconformity, and sometimes on the more progressive notion that male-to-female drag reproduces damaging stereotypes about both gay men and women. However, as queer theorist Judith Butler famously argued, the practice of drag opens a possibility for considering how gender is socially constructed rather than biologically determined. In this view, drag makes it clear that all of us, whether we "cross-dress" or not, are constantly constructing our gender through performance rather than embodying an eternal essence. Thanks in part to the growing influence of such constructionist perspectives on gender, our society is currently experiencing a flowering of diverse ways of expressing gender, including trans*, gender-fluid, genderqueer, and nonbinary identities, which find representation in contemporary drag performance as well.

Contemporary drag also frequently represents the intersection of other aspects of the performers' identities beyond gender and sexuality, such as social class, race, and ethnicity. For example, on the popular television show RuPaul's Drag Race, where participants compete in various performance-based challenges, the competitors often construct their drag personas with specific references to the intersection of racial and ethnic identity with queerness. For many Latinx drag performers, this means incorporating elements of cursilería into their performance.

Cursilería refers to the acts associated with being cursi, or excessively emotional, sentimental, and melodramatic. In my book Between Camp and Cursi: Humor and Homosexuality in Contemporary Mexican Narrative (SUNY Press, 2021) I argue that the use of cursilería in humorous Mexican literature with queer themes expresses a feeling of being marginalized from definitions of "modernity" that are always written in the Global North. The humorous use of camp to express queer identity in Mexico is also always cursi, meaning that it has a specifically Latin American, "melodramatic" aspect that includes a decolonial critique of modernity. This same type of aesthetic can be seen in the hit Netflix show House of Flowers, which centers cursilería and prominently features the drag-like performances of travestis--queer subjects who often identify with the male sex but female gender. Travesti is a Latin American identity that, though like some trans* identities in the English-speaking world, is not exactly the same, as it represents the unique history of Latin America. The cursilería of many US Latinx drag performers includes resonances of this history.

In sum, drag offers us a lot more to think about than we might assume at first glance. Not only can it lead us to examine the inherent contradictions of our binary gender system, it can also illustrate the intersection of gender with racial, ethnic, and regional identities. The knowledge that genders are not the same across all cultures bolsters the definition of gender as a social construct, the necessary starting-point for any true liberation from gender- and sex-based discrimination.

Brandon P. Bisbey is Associate Professor of Spanish and Coordinator of Latina/o and Latin American Studies at Northeastern Illinois University. 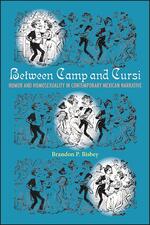 Between Camp and Cursi

What Author is #NextUP at SUNY Press?