Henry Dreyfuss was a New Yorker.  He was born and raised in the lower reaches of Harlem; went to high school on the West Side; designed stage sets on Broadway; married the daughter of a former Manhattan Burough president from the East Side; opened an industrial design office in Midtown; and had major clients in Midtown and Downtown.  Dreyfuss’s early works include the interior and exterior of New York Central’s 20th Century Limited luxury train, which established his fame. Hundreds of Dreyfuss designs followed and are featured in five volumes of a privately printed pictorial record.  Such prolific output would have required several Henrys, and indeed Dreyfuss hired help from the best talent available – from designers to sculptures to illustrators to engineers – a staff of about 30 including his wife who provided direction for the firm.

Some of the staff deserved their own stellar reputations.  Roland Stickney came to Dreyfuss’s attention via a rendering of a custom-built Rolls-Royce in the window of their showroom on Fifth Avenue; his beautiful watercolor drawing of the Independence (interior by Dreyfuss) was featured in a two-page spread in the ship’s maiden-voyage brochure.  Alvin Tilley, an engineer, assembled dimensional charts of average Americans called Joe, Josephine and Joe Jr. – charts that were famously made available to the public, including Dreyfuss’s competitors.  Julian Everett designed toilets and vanities for the Crane Company, one of which earned Dreyfuss a Gold Medal for “Excellence in Design of Industrial Products for Architecture” by the Architectural League of New York.  Donald Genaro, who often worked out practical solutions for Dreyfuss design challenges, gave shape to the Bell System’s Trimline telephone that is the only Dreyfuss work in the collection of the Museum of Modern Art.  And there were others.

Dreyfuss ran the firm for a full 40 years, and then the firm continued in operation for another 45 years after he retired.  During that time, they designed business telephones for the Bell System, the Gator utility vehicle for John Deere & Company, the interior for the Falcon Jet Model 50, and others.  Henry Dreyfuss and John Deere, the person, were long gone when work ended for Deere & Company, the Dreyfuss firm’s last client.  William Crookes, then president and designer of the Gator, dissolved the Dreyfuss firm that had produced some of the best industrial designs of the 20th Century.

Ralph O. Meyer is a physicist and Russell Flinchum’s coauthor of Henry Dreyfuss. Meyer is also the author of Naked Physics and Old-Time Telephones! 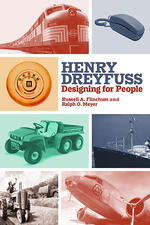