We know the adage about real estate. It marks buyers’ desires to be in the right neighborhood—to keep up with the Joneses, or to avoid traffic or neighborhood blight. But the phrase also speaks of artists, authors, and activists about their needs and networks. Specific locales can spur creative types and incentivize political efforts. In the nineteenth century, Italy’s cities offered such locales to US expats, calling them to make new homes. They often accepted a kind of nomadism, making multiple locations home through the years. This ongoing mobile life and homemaking plays into Engaging Italy: American Women’s Utopian Visions and Transnational Networks. For the three women at its core, “location, location, location” could well have been their common chant. For Anne Hampton Brewster, Caroline Crane Marsh, and Emily Bliss Gould, who threw themselves into their work abroad as authors and activists, location was crucial to the work they did. But finding and creating homes was not without its challenges.

These homes were often temporary, as war, financial losses, family deaths, and climate moved them from place to place. Marsh, who arrived in Italy in 1861 with her husband, the first US Minister Plenipotentiary to the newly unified Kingdom of Italy, moved from Turin, to Florence, to Rome—as the Kingdom’s capital and parliament did—all within a decade. And even within each city, the household moved from structure to structure, under her supervision. Initially they lodged in hotels, with nothing to change, but then the moves to more permanent residences demanded work to make them homelike. After two months in an elegant and more-than-adequate hotel on Turin’s Piazza di Castello, for example, Marsh wrote of being “very busy . . . with the preliminary arrangements for housekeeping.” Once their boxes from America arrived, she had the responsibility of getting them “comfortably settled” with their “familiar books” surrounding them. And there was shopping for silver and china “to fill up the wide gaps” in the “cuisine department,” as the Ambassador’s wife deemed it should be, given their duties. 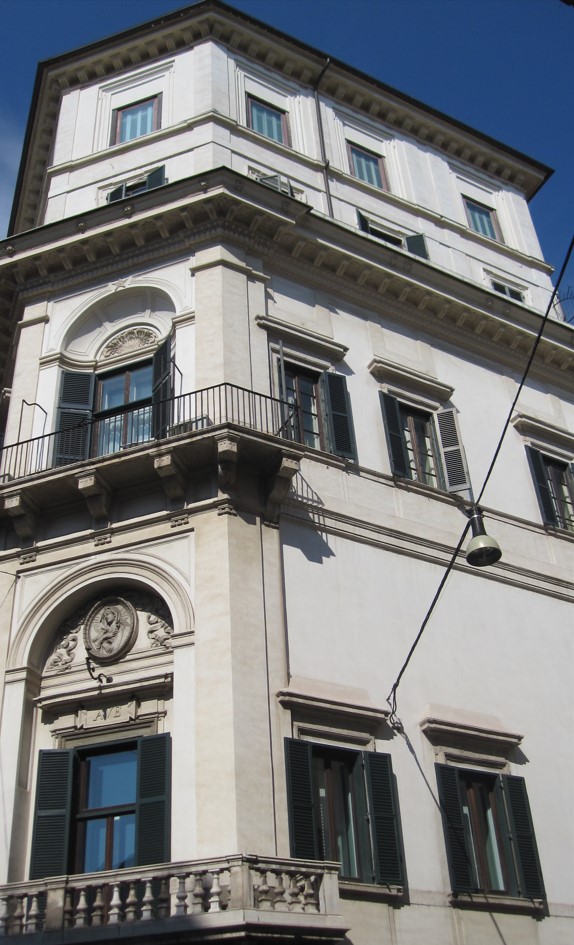 The Palazzo Albani on Via Quattro Fontane and Rome's Quirinale Hill, where journalist Anne Hampton Brewster hosted receptions in her spacious, multi-room apartment

With almost every steamy summer, the women vacated the cities and headed to the mountains or further north. They hoped to avoid the fevers of malaria (literally, “bad air”). Each return often meant a new space, sometimes “in a horrible confusion,” as Brewster wrote from Rome one autumn. They took charge of reorganizing and decorating, writing of wallpaper, paint, rugs, fireplaces or stoves, and views. After dealing with the “confusion,” for example, Brewster wrote, “now thank heaven, it is in order and I have not been so comfortable for years. It is the prettiest sunniest coziest place possible.” The loggia, where she usually ate, allowed her to “look out on lovely views”—which she described as “so Italian” and “picture like” but also essential to her writing.

Another move Brewster made—thanks to her friendship with Gould, also improved her health as well as her view. Gould and Brewster met because they lived near each other and Rome’s Spanish Steps—an area when many expats, such as Robert and Elizabeth Browning, Nathaniel Hawthorne, and Henry James made their homes. Preparing to leave for the summer, Gould had “kindly” invited Brewster into “her fine airy apartment . . . during her absence.” Brewster complained of her own “wretched rooms” just a few steps away in the Via Sistina as “very unhealthy owing to the bad drains on either side.” She admired Gould’s space on the “piano nobile” or above, where the ceilings would be high, the rooms and windows larger.

Map in the Keats-Shelley House near Rome's Spanish Steps indicates the density of nineteenth-century expats living and networking in the area  (reprinted in "The Keats-Shelly House: A Guide" & used with permission)

As soon as Brewster was able, she moved into an apartment on the Via Quattro Fontane which was “high, healthy and airy.”  These nicer locations helped Brewster compose her weekly columns, to be published in the Philadelphia Evening Bulletin, the Boston Daily Advertiser, and other US newspapers. Additionally, her spacious rooms on the upper floors of the Palazzo Albani on the Quirinal hill enabled her twice-weekly receptions, crucial to maintaining the network of expat life which fed her writing.

Networking was one of the most important parts of the women’s chosen locations. They needed to be able to socialize nearby as well as to host guests. Marsh’s favorite home, the Villa Forini, just outside Florence’s Porta alla Croce, fostered this networking. The villa’s dining room was important not only for formal events but for Marsh’s interactions with friends. There one December evening, for example, she worked with Gould, as the two discussed their activist efforts and Gould composed a fundraising letter. Gould took the lead as she wrote to Dr. Thompson, president of the American Foreign and Christian Union, but both women worked with the newly established protestant schools in Florence. 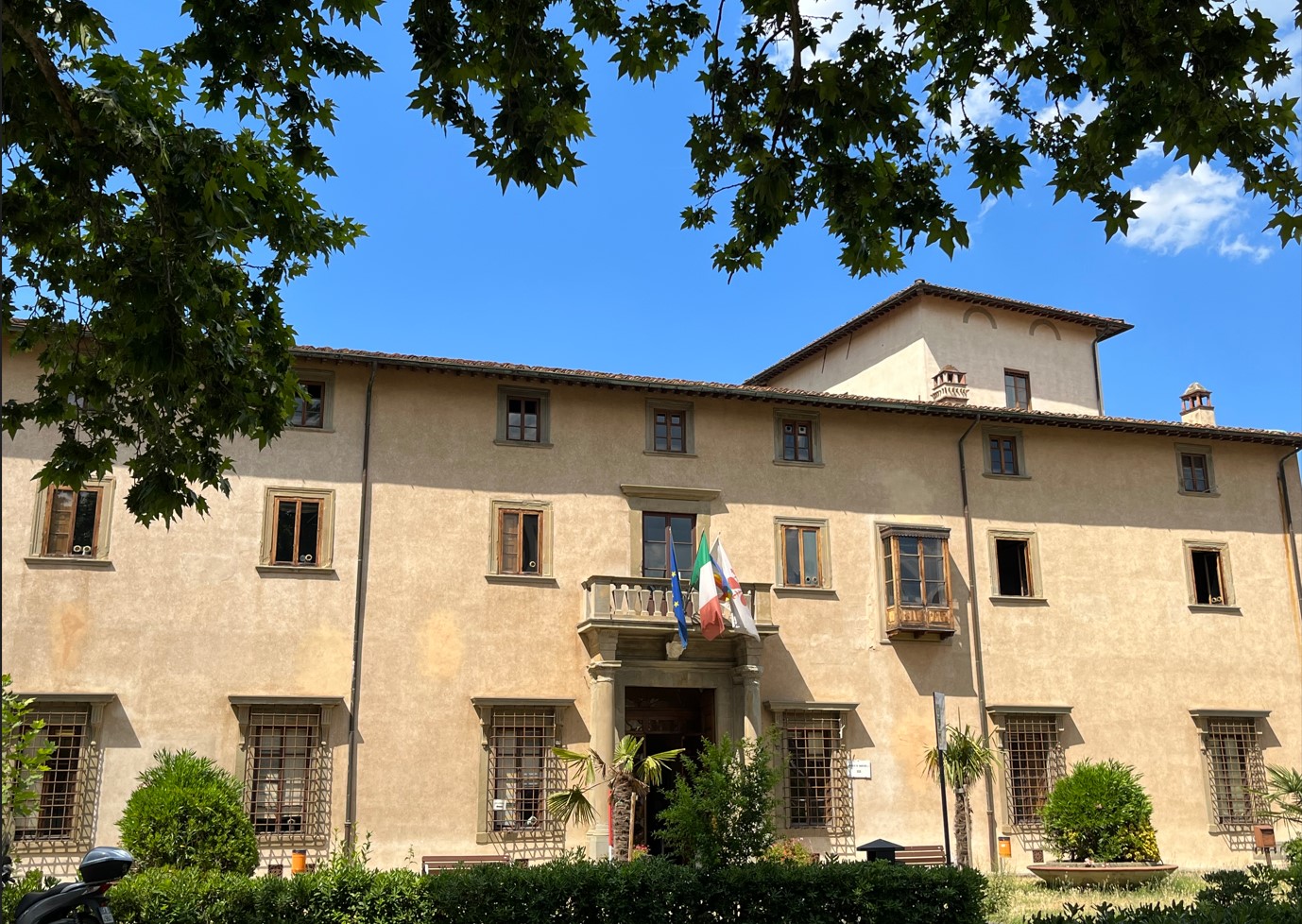 As she wrote the letter, Gould depended on Marsh’s encouragement and support. She later reciprocated with insistent invitations for the Marshes to visit her in Rome and lodge in her expansive home. In 1870 she proudly wrote that she had room for the ambassador and his wife and for their servants as well: “We have a big house now, and I know I can make you more comfortable than you could be at a hotel.”

Each of these privileged women deemed ample space necessary, significant to the work they did. They also made the space their own in order to make the most of the time they spent there. And, most importantly, the locations each found factored into their relationships. They knew that “location, location, location” would impact what they viewed, what they heard, and whom they hosted. Their selected locations kept them engaged in their web of relations and stimulated their work as activists and authors abroad. These activities lie at the heart of Engaging Italy.

Etta M. Madden is Clif & Gail Smart Professor of English and Assistant Department Head at Missouri State University. As a recipient of a William J. Fulbright award, she served as a Senior Lecturer in American Literature at the University of Catania in Sicily. Her books include Eating in Eden: Food and American Utopias (coedited with Martha L. Finch); Bodies of Life: Shaker Literature and Literacies; and Selections from Eliza Leslie. 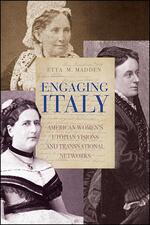