The Enduring Importance of New York Courts in Our Lives

How much does the New York court system matter?

The U.S. Supreme Court is often in the news these days but actually it is mostly state courts that handle a wide range of problems that confront people every day, e.g., government’s authority, people’s rights, contracts and business relations. My new book The Crucible of Public Policy: New York Courts in the Progressive Era focuses on key constitutional cases decided by the state’s highest court, the Court of Appeals, in the period 1900-1920.

That court was (and I believe still is) the nation’s most important state court, the one that other courts looked to for guidance on tough constitutional issues. In the period I studied, its decisions always followed the state and U.S. constitutions, of course, but interpreted them in light of contemporary conditions and the issues presented in the cases. The court was so prominent that Chief Judge  Alton B. Parker (1897-1904), used his position and stature to gain the Democratic presidential nomination in 1904 (he lost to incumbent president Theodore Roosevelt).

Some of the court’s decisions set judicial precedent or confirmed the constitutional basis for programs still in place today. Others dealt with complex issues in the context of the time that still need addressing today.

Do New Yorkers have a right to protect their own photos and images? They do thanks a 1903 privacy law, one of the first in the nation, still on the books today. The Court of Appeals, in Roberson v. Rochester Folding Box Company in 1902, declared that neither the state nor the federal constitutions gave people an inherent, natural right to privacy.  Only the legislature could do that. The decision put the spotlight and pressure on the legislature to act, which it did  the next year.

Can the state regulate the services and rates of public utilities such as gas and electricity companies? The answer has been “yes” since the legislature established the state Gas and Electricity Commission in 1905 and the Court of Appeals confirmed its constitutionality in Village of Saratoga Springs v. Saratoga Gas, Electric Light, Heat and Power Company in 1908.

Can the state regulate the number of hours people can work in commercial establishments? The Court of Appeals affirmed that right in People v. Lochner (1904). The U.S. Supreme Court overturned that ruling in Lochner v. New York 1905, holding the limiting of hours was a violation of constitutionally guaranteed liberty of contract. But later, the courts swung around to the New York court’s expansive philosophy of government’s role and began approving legislative authority to regulate business and the economy. The rationale of New York’s People v Lochner decision, rather than the federal court’s restrictive view of Lochner v New York, has predominated for nearly a century.

Can the legislature pass laws to protect special categories of workers? The Court of Appeals said no in People v. Williams, 1907, striking down a law intended to protect women workers by forbidding their employment at night in factories.

But determined advocates got the law repassed and, when it was challenged in court again, presented massive evidence from a state investigation of factory working conditions and other sources. Persuaded by the documentation of need, the court approved the law. That set a precedent for courts approving laws to meet well-documented social and economic needs.

Can the state require students to be vaccinated against infectious diseases as a condition for attending public schools? The issue is sometimes still raised in courts today but the fundamental answer is yes, it can. That was decided by the Court of Appeals in People v. Viemeister (1904), a case involving smallpox vaccination requirements. The right to attend school “is necessarily subject to some restrictions and limitations in the interest of the public health,” said the judges. That authority has been confirmed by courts several times since then.

Is political criticism of courts new? No, it is not. In 1910 ex-president Theodore Roosevelt, seeking another term as president, criticized several courts for their “foolish and iniquitous” decisions. He singled out the Supreme Court’s Lochner v New York and the Court of Appeals decision striking down the state’s first workers’ compensation law as prime examples. TR called for giving state voters the power to recall and override state court decisions that declared laws unconstitutional.

The proposal met massive opposition. The New York State Bar Association said it “would destroy the independence of the judiciary and the impartial administration of justice.” Roosevelt made it a feature of his run for president in 1912 as head of the new Progressive Party.  He was overwhelmingly defeated, and the judicial recall proposal faded away after that.

Courts play a powerful, influential role in modern life. “We are under a Constitution but the Constitution is what the judges say it is,” Charles Evans Hughes, Chief Justice 1930-1941, remarked earlier in his career. That gives the court strong authority but also heavy responsibility to make wise decisions that affect all of us.

Bruce W. Dearstyne is a historian specializing in New York state history. He is the author of several books, including The Spirit of New York, Second Edition, also published by SUNY Press. 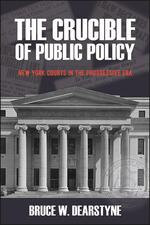 Ask Students for Feedback and Then Confer: Democratic Learning Strategies for Teachers

The Limits of Online for Hands-On Skills