Philosophy from a Foreign Land: On Leo Strauss

Why should a contemporary reader should be interested in a book devoted to the intellectual biography of Leo Strauss? First of all, I believe, because he is one of the most important philosophers of the twentieth century. Born in 1899 in Kirchhain (Germany) and died in 1973 in Annapolis (USA), Strauss lived between very different cultural worlds (Germany, France, England, and the United States), without ever feeling comfortable in any of these. He and spanned the great events of contemporary history: from the Great War to the Weimar Republic, from the rise of Hitler to the Shoah, from the Second World War to the consumer society.

Against the simplistic and misleading interpretations that tend to see Strauss as the mere inspirer of the policies of the American neoconservatives or as a slavish follower of Judaism, this book wants to show the richness of Strauss’s thought, without concealing his ambivalences and contradictions. Moreover, this volume emphasizes the fact that Strauss’s existential and intellectual trajectory addressed the great themes of philosophical and cultural reflection of his times: just to name a few, the crisis of modernity, the relationship between philosophy and politics, the role of religion in public life, and the affirmation of social sciences.

The second reason Strauss’s work is worth studying is that he testifies to the importance of comparison with the classics. Strauss is an omnivorous reader of the most relevant texts of the philosophical tradition: from Plato to Nietzsche, from Hobbes to Hegel, from Maimonides to Machiavelli, from Spinoza to Heidegger, from Al-Farabi to Marx, from Xenophon to Weber. His interpretations are often original compared to those commonly accepted by historians of philosophy because Strauss is interested in these authors not only from a scholarly and philological point of view, but above all because they represented a model of knowledge and a style of life. We must return to the classics, according to Strauss, not in the name of nostalgia or conservatism, but because their teachings are decisive for our life of men and women of our time, being the expression of wisdom, at its highest and noblest level.

Another aspect of Strauss’s work seems to me to be fundamental today is his conception of the relationship between the philosopher and the city. For Strauss, the philosopher is always a foreigner in the civic community to which he/she belongs and in which he/she lives since his/her function is to question the beliefs and prejudices that come from the political, cultural and religious heritage. Precisely because of this peculiar position, the philosopher cannot express himself/herself freely. If he/she did, he/she would be persecuted and condemned to death, as happened to Socrates in the classical Athens, since his/her ideas are too much at odds with the beliefs of the city. The truth of philosophy is not compatible with the always different and unstable opinions of the inhabitants of the city.

For this, the philosopher (as much of antiquity as of the modern age) must devise effective strategies to dissimulate his/her ideas in such a way as to escape persecution and condemnation by his/her fellow citizens. The contemporary interpreter must therefore pay special attention to silences, ambiguities, and contradictions of the texts of the past, because it is precisely there that the authentic thought of the authors is hidden. In doing so, Strauss recognizes the fundamental role of philosophy, which he considers as the only way to achieve not only knowledge, but also human happiness. The contemplative life is always more important than the practical life. Only philosophy—not politics or religion—is for Strauss the path to authentic emancipation.

Especially today, in an era dominated by the social media, by AI and by serious socio-economic inequalities, it is necessary to go back to questioning the status and role of philosophy and the humanities in interpreting and understanding transformations of global societies. And Strauss, with his ability to deal with the great texts of the past and with his theoretical acumen, can be a useful reading to rethink the relationship between human beings and the world in a more fruitful way.

Carlo Altini, Ph.D., is Professor of History of Philosophy at the University of Modena and Reggio Emilia and Co-director of the editorial series “Straussiana. Studi e testi” (Edizioni ETS – Pisa, Italy). He is also member of the “Consulta Nazionale di Filosofia”, of editorial board of the journal “Filosofia politica” (Società editrice Il Mulino – Bologna, Italy) and of editorial board of the series “Incipit” (Scuola Normale Superiore – Pisa, Italy). https://unimore.academia.edu/CarloAltini 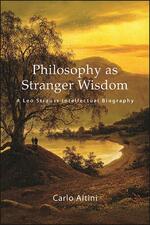