A No Jurisdiction Film Review

My two-part review of Matt Reeves’ The Batman and how it engages with the trauma of 9/11 continues below! This review captures how I analyze post-9/11 genre film and its commentary on our ever-changing legal and political order in my recently published book, No Jurisdiction. For Part 1 of the review, see the link below:

Link to Part 1 – A Sometimes Kinky, Sometimes Abstinent Superhero: Batman, Sexuality, and the Trauma of 9/11

Part 2 – Riddle Me This: How is a Dark Knight like a White Terrorist?

Correlating the Batman with the Riddler, an analogue for the “lone wolf” terrorists who broadcast their hate over the internet, the film suggests how and why the Caped Crusader appeals to white men who feel outcast. The Riddler films his killings of Gotham City officials. When he broadcasts a live execution of the District Attorney, one online viewer comments, “When do we get the full manifesto?” The Riddler goes on to actively target the Black woman mayor-elect who hopes to bring a systemic transformation to the city and creates a video that shames Bruce Wayne’s mother Martha for her hidden struggles with mental illness. The film’s Riddler is an analogue for white terrorism and, in the misogyny of his mission, for the incel movement.

Incels or ‘involuntary celibates’ have formed a misogynist online community linked to the male supremacy movement that “gathers males who feel rejected by women and, for this reason, have a strong sense of frustration caused by their situation of forced sexual abstinence” (Barcellona 173). The Southern Poverty Law Center stresses the link between the white supremacy and male supremacy movement, noting that because both “are driven by fear of the perceived loss of white male status, the ideological tenets that animate these hateful worldviews intermingle and bolster each other” (“Male Supremacy”). Writings on the incel movement frequently point to the toxic search for male friendship as a start of radicalization, and the film’s staging of the Riddler’s obsession with the superhero suggests the appeal of Batman’s dangerous model of violence for certain outsiders (Romano). The Riddler sees in the vigilante Batman a friend who shares his hatred toward the established order.

Reeves often slyly suggests how the Riddler and the Batman parallel each other, particularly in their voyeurism and in their predilection toward violence as an outlet for sexual release. Both men use binoculars to peep through the windows of homes—the Riddler watches a father and his son at play in their living room while Batman watches Catwoman undressing. Both villain and hero operate with the same violating look. In terms of their shared sexualized violence, in the opening scene of the film, the Riddler straddles over a prone victim to violently bludgeon him to death (see below).

When he retrieves his weapon that fell out of his hand during the killing, he sits back on the victim’s posterior. He pants in exhaustion. The camera pans up toward the villain, cutting him off from the waist down. While he is in fact fiddling with duct tape off camera, it appears that he is loosening his pants. Reeves stages the murder as a kind of necrophilic sodomy, setting the tone for a film that explores the macabre sexuality of violence. Late in the film, Batman adopts a similar position over one of the Riddler’s followers pushed to the ground (see below).

In a blinding rage, he straddles him, punching his head with an intensity resembling that of the Riddler when he murdered his victim. The usually taciturn Batman screams as he punches downwards—is this what a Dark Knight orgasm looks like? Can he feel ecstasy only when bone breaks beneath him? Such staging reveals that these men both use violence, it seems, as an outlet for sexual feeling.

Batman is initially oblivious to how figures of hatred see him as an ally, to the way his extralegal violence resonates, and the film’s most poignant scene sees him impotently facing the horror of this revelation. In this way, the film mulls the co-option of superhero icons by fascist forces. During the protests against George Floyd’s murder in summer of 2020, some police officers emblazoned themselves with the skull logo of the Punisher superhero (Cascone). The wearers of the logo gleaned none of the critique of extralegal force inherent to the Punisher character; rather, they relished in his apparent valorization of such force. Batman learns that his symbolic dimensions are entirely malleable in ways he does not foresee during his interrogation of the Riddler at the Arkham State Hospital.

The scene begins with dialogue that highlights his alter ego Bruce Wayne’s class privilege, positioning this scene as a confrontation of the hero’s complicity with oppression both in and out of his costume. The Riddler argues that the billionaire Bruce Wayne does not merit the title of “orphan” since he could sit “looking down on everyone with all that money.” By contrast, the Riddler highlights how he was completely abandoned by the system as a boy within an orphanage where he and his fellow children were left to suffer. In the winter, he describes, a baby would die from the cold. The Riddler then asks, “But oh no, let’s talk about the billionaire with the lying dead daddy because at least the money makes it go down easy, doesn’t it?” While he poses the question, the Riddler faces the camera in medium close-up. How he faces the viewer here implies that he is also confronting us and our tendency to be comforted by exceptional superheroes in lieu of actually facing suffering and true poverty.

Then, the scene becomes doubly discombobulating through its shift in tone—the Riddler goes on to relish the sight of Batman. Up to this point, like Batman, we assumed that the villain would see him as an enemy. The Riddler exclaims, “God look at you, your mask is amazing. I wish you could’ve seen me in mine.” Here, Reeves films Batman at a low angle from behind the Riddler (see below).

The filmmaker perverts the classic hero shot as Batman is seen from the vantage point of an admiring perpetrator, of the hateful. When the Riddler stands up, the reflection of the Riddler starts to encroach onto Batman as he tells him, “You showed me what was possible.” There is a cut then to a reverse shot as the Riddler notes, “You showed me all it takes is fear and a little focused violence. You inspired me!” When Reeves cuts between the men, each shot shows the silhouette of the other on the edges of the frame—they are not antithetical forces but terrorizing shadows of each other (see next two images).

By the scene’s end, undercutting Batman’s assertions that they are nothing alike and fulfilling the standard post-9/11 superhero trope of fusing hero and enemy, Batman leans into the Riddler’s reflection on the glass (see below).

Batman, realizing he has inspired the Riddler to perform a terrorizing act that he does not fully understand, bangs on the glass while screaming, “What have you done?” He punches at the glass with extreme force but barely scuffs its surface. The Riddler ignores him and loudly sings, “Ave Maria,” a song whose lyrics praise the blessed womb of the Virgin Mary (“What are the lyrics to 'Ave Maria'?”). Our incel villain sings the praises of a divine femininity that is inherently Christian, maternal, and reproductive (of the white nation?) as our hero falls into terror. At the very moment where Batman realizes that he is an icon of hatred, and that his “fear and a little focused violence” is a malevolent inspiration, he finds himself to be at his most powerless. His fists of fury can do nothing to stop what’s coming; indeed, they may only hasten the catastrophes to come.

Batman faces the grotesquerie of his violent symbolism and discovers a need to transform what he means to the public. Indeed, he has come to understand himself as very much the regressive sort of masculine icon that has emerged in past times of American trauma. Within her aforementioned study, Mann compares the icons that arose in post-9/11 popular culture to the muscled John Rambo in the post-Vietnam era. After describing Rambo as “grotesque and comic, frightening and adolescent” (Mann 188), Mann quotes Lynda Boose’s fuller discussion of the muscled Sylvester Stallone character: “the representation of maleness and the narrative in which it is imagined… has become progressively less adult as a projection and more and more the cartoon image of a little boy’s fantasy of manhood” (qtd. in Mann 188). Reeves’ Batman grapples with how he can move beyond that ‘cartoon image of a little boy’s fantasy of manhood’ whose only answer to systemic crime, corruption, and suffering is a good beating.

In its closing moments, as the hero meditates on the necessity to not act out but to work through trauma, he engages in a new kind of touch. This touch is not one of anger but of compassion. While carrying an injured victim to a stretcher, he admits, “Vengeance won’t change the past, mine or anyone else’s. I have to become more. People need hope. To know that someone’s out there for them.” His words act as a repudiation not only against his War on Crime but against the retributive War on Terror in which our hero has been aligned. The camera switches to a low angle hero shot as the woman grabs on to Batman’s arm (see below).

He then rests his hand on hers and gives her a nod of recognition—he sees her in pain and fear. He doesn’t let go of her until she is airlifted away. The film thus culminates not with Batman engaging in “Bam!” “Pow!” theatrics but with a note of tenderness. Our heroes can sense our (culture’s) pain and hold on to us as we contemplate what it might mean to heal.

Yet a final question emerges: Can this Batman (and we viewers) let go of the thrilling eroticism of violence and that intoxicating Manichaean “us vs. them” framework that means some enemies just must be beaten to a pulp? The Batman moves to the end credits before it can answer that question. Some queries, it seems, may pose too much of a challenge for even the mightiest of superheroes!

This concludes our second No Jurisdiction film review. Are you convinced? Let me know in the comments and on Twitter @fareedonfilm.
Also, please let me know what contemporary genre movies I should tackle next. I feel that it might be time to tackle the Marvel Cinematic Universe now that we have stopped by DC Comics. Perhaps we should look at Spider-Man: No Way Home (2022), a tale about a webslinger who was a protégé of the superhero and arms dealer Tony Stark. Just how does the film frame Spider-Man’s relationship with and exhilaration toward the obliterating drone technology that drives the War on Terror?
My Spider-Sense is feeling another blog post coming on!

As you await the next blog post, be sure to buy my book that features dozens more movies (including films from Sam Raimi’s Spider-Man series!):

Cascone, Sarah. 2020. “Police in the US Have Embraced the Punisher Skull as an Unofficial Logo. Now the Character’s Creator Is Asking Artists of Color to Reclaim It.” News.artnet.com, June 10. https://news.artnet.com/art-world/punisher-black-lives-matter-1883013.

“What are the lyrics to 'Ave Maria'?” 2022. BBC Studios Distribution. https://www.classical-music.com/features/articles/ave-maria-lyrics/. 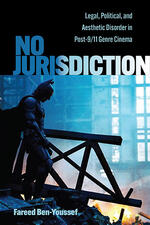 Philosophy from a Foreign Land: On Leo Strauss