Political Theory at the Park

Why would a political theorist write a book on baseball? This is a question I have fielded many times from interlocutors with varying degrees of skepticism and enthusiasm as I was working on my book, Democracy at the Ballpark: Sport, Spectatorship, and Politics.

The shortest answer is that when I went to graduate school, I noticed a palpable disconnect between the democratic theorists I read and the world I knew growing up. I grew up in rural Mid-Michigan where neither my family nor many friends had an abundance of wealth or opportunities. The most influential books in the world of democratic theory are largely written by a small group of elite thinkers who came from wealth, attended ivy league schools, and work in that same milieu. Inevitably this background shapes their work.

When I imagined explaining these texts to my grandparents, I could not imagine any of these theories ringing true. It seemed to me that democratic theory was incredibly disconnected from ways that average, everyday people experienced politics. This was new—I always felt thinkers in the canon like Plato, Nietzsche, Arendt, etc. spoke directly to issues that shaped the lives of the people I knew. How could one imagine a more egalitarian democratic theory that focuses on politics as they exist?

My first inclination was to look at what people care about. I think it is a natural and understandable bias that those who study politics their entire lives think political institutions especially are important. However, I saw that many people do not interact with or care about these types of politics. Instead, they encounter politics in everyday pastimes. Simply because I think certain types of politics are important, does not mean most agree. If we care about understanding democracy, we need to expand our scope of what we consider meaningful engagement with politics.

To attempt to expand the discussion, I thought about parts of everyday life that people invest with meaning and concern. One obvious arena is sport—Americans spend an incredible amount of time, energy, money, and emotional investment in sport. It is a realm that spectators fill with meaning. Because sport has been imbued with importance, it is natural that this visibility creates a platform for spectators to encounter political issues.

I used baseball as a case study and focused on the fan experience of the sport rather than the games, athletes, or history of baseball itself. When looking at politics in sport, one sees a very contested realm of different ideas and beliefs. Sport is a realm of pluralism, where some spectators boo and others cheer. My book goes through countless such examples, but the point is that baseball fans are not a monolithic group.

The results are not always positive or pleasant. Baseball has been a scene of racial abuse, exclusion, and militaristic nationalism. It has also been the site of integration, inclusion, and resistance. Baseball both mirrors American politics and at times shapes politics. And for me, the crucial point is that this happens on a mass scale and involves regular people.

Baseball is only one example of an arena of everyday life filled with meaning. Hopefully this project encourages conversations about moving towards a democratic theory that is not rife with elitism. Understanding elite political institutions is of incredible importance, but the fabric of democratic life is fuller and more nuanced than these flawed institutions.  As democratic backsliding continues in the American context, this perspective that focuses on everyday politics only becomes more important. When citizens are excluded and democratic legitimacy challenged, spaces for pluralism in public life like sport present venues we should not underestimate.

Ultimately, I wrote this book to try to bridge two worlds I care about—the world I grew up in, and the academic work that inspired me in graduate school. Baseball presents a unique insight into both worlds and serves as a useful metaphor. The book is an attempt to blend the two and begin thinking about a more democratic kind of democratic theory. 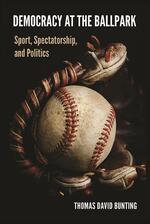 Democracy at the Ballpark