From the start, punk rock was a translocal phenomenon. Punks in London took influence from their New York City counterparts. The British Invasion of punk inspired a new generation of young North Americans to blast out three chords and embrace DIY. By the early 1980s, punk scenes existed across the western world, into the global south, the Eastern Bloc, and non-aligned world. Many of these scenes went underground as part of the hardcore wave of punk rock. But other punk genres emerged that challenged dominant nationalist or imperial narratives with a bottom-up perspective. Post-colonial punks included artists that sought to employ a punk rock attitude to champion previously colonized and marginalized cultures.

The debate over whether punk is political began with the birth of the subculture. Many of the first wave punk bands are generally understood as non-political. But these “non-political” bands sometimes made political statements. The Ramones mocked President Reagan with “Bonzo Goes to Bitburg.” [https://www.youtube.com/watch?v=P-L_5HedJbw] The Sex Pistols attained anti-establishment status on the occasion of the Queen’s Silver Jubilee, when they performed their single “God Save the Queen” while floating down the Thames. This resulted in a high-profile arrest which became the promotional video [https://www.youtube.com/watch?v=g-38GX2YQig]. Manager Malcolm McLaren planned the stunt to drive sales, but he also imagined it as a Situationist act of public disruption. It was not his first. Prior to this when managing the New York Dolls, he dressed that gender-bending band in red leather and gave them copies of Mao’s Little Red Book to wave about on stage. He (rightly) believed vocal support for communism was one of the most controversial statements one could make in American life. The reaction to these provocations from the mainstream music industry indicate the establishment saw punk as political or at least controversial enough to avoid. Sire Records signed New York bands like the Ramones and Talking Heads in the mid-1970s. But the marketing department of that label insisted that these bands divorce themselves from the punk scene and call themselves new wave instead. The same was true of Los Angeles punk bands. The Go-Gos signed to the independent label I.R.S Records who marketed them as an all-American girl group, not a punk band. A sharp division was starting to be drawn between bands that often came out of the exact same scenes—more commercial labels insisted the bands be classified as new wave, not punk, while independent punk labels began to pop up in the US and UK.

Punks in the 1980s took their cue from this and other negative reactions from the mass media. The decade was a time of cultural fear-mongering such as Satanic panic and stranger danger. Punk panicked many in mainstream America. That reaction to punk was partially driven by a sensationalized presentation of the subculture in the media, but also by the counter-cultural nature of 80s punk that rejected inclusion in the mainstream music industry and acceptable consumer youth cultures. Hardcore punk offered an alternative set of structures for the production of popular music and embraced a more democratic form of cultural life for young people. From that perspective, hardcore punk was deeply political and that inspired other kinds of punks and even people in other underground subcultures (like goth). Rather than expressing partisan political views, these punks often made broader statements about the larger structures of modern society, including colonialism. In the 1980s, one punk band made their mark on the British charts by combining various forms of folk music (especially from Ireland) with punk rock. The lead singer of the Pogues Shane MacGowan was born in Kent, UK to Irish parents. His father hailed from Dublin and his mother from Tipperary, where he spent his summers as a child. Although the Republic of Ireland had been independent from the British Empire since 1922, the Republic left the Commonwealth in 1949 to pursue even greater economic independence. Yet emigration continued apace well into the 1990s. There was a serious lack of opportunities for work in the Republic until the period known as the Celtic Tiger during the 90s. This included MacGowan’s family. When he formed a band with Spider Stacy, Jem Finer, and James Fearnley in 1982, they adopted the name Pogue Mahone, as gaeilge (meaning in Irish) for “kiss my ass,” soon shortened to the Pogues for proprieties’ sake. Their drunken, vulgar style thrilled British punk and post-punk audiences, but initially went over like a lead balloon in an Ireland still struggling with the trauma of centuries of colonialism and negative stereotypes. Many believed that they were merely popular in Britain because they reinforced the pernicious image of the drunken Irish lout. It was not until the band performed on Irish TV alongside one of their major influences, the Dubliners [https://www.youtube.com/watch?v=yAEFKjqPtlU] and had their songs covered by beloved Irish folk singer Christy Moore [https://www.youtube.com/watch?v=FwXBtmRTsFs], that their reputation was cemented as truly reflecting the diversity of Irish culture at home and abroad as part of the Irish diaspora.

The Pogues sought to merge their Irish diasporic cultural identity with an oppositional punk one. Others took influence, embracing their cultural identities and tying it to their punk practices. In post-9/11 America, embracing an Islamic identity became more fraught as federal and local officials cracked down on what they considered “radical” strains in the American umma (Muslim community). This would shape a new punk sub-genre that emerged out of the mind of an American convert to the faith. Michael Muhammad Knight, a punk rocker raised in a New York Catholic family, converted to Islam in high school after reading the works of Malcolm X. By 17, he had traveled to Islamabad, Pakistan to study Islam at the Faisal Mosque which had been endowed by the ultra-conservative Saudi King Faisal in the 1970s. His brush with the conservative doctrine of the Mosque drove him to a crisis of faith. He wrote himself out of it in his novel The Taqwacores about a Muslim punk house. The characters live out their faith on their own terms, imbued with a strong punk ethos. Initially, he sold it zine-style in both Islamic and punk spaces, but he soon found proper publication with punk label Alternative Tentacles. Some young Muslims who read the book went on to created the scene Knight imagined. Bands like the Kominas and Secret Trial Five brought their critique of American imperialism and of conservative strains of Islam to both a punk rock and an Islamic audience [https://www.youtube.com/watch?v=kNJsiWDYK6c&t=1s]. The Pakistani-American members of the Kominas started playing together in Worcester Massachusetts in 2005 and put their ethnic and religious identities at the forefront of their work—a bold move given the atmosphere in American political culture at the time. Songs like “Sharia Law in the USA” illustrated their contempt for Islamophobia they experienced in the US, but also took aim at the ultra-conservative interpretation of their faith [https://www.youtube.com/watch?v=_M1cijnO4nA]. American Muslims were regularly being monitored and questioned on their loyalties to the US. Meanwhile, Muslims who did not conform to particular conservative values faced backlash from some of their co-religionists abroad. An embrace of a punk identity centered on their ethnic or religious identity was a middle finger to anyone that demanded their conformity. It also allowed them to work out these tensions of being Muslims in America. Punk provided a space for this kind of complicated identity exploration, in part because many punks advocate for a strong sense of individualism. One can form an identity, you don’t have to just accept what is imposed on you by society. Hence, punk could function as a means of rejecting identities imposed by colonial powers, like Britain and the United States.

Post-colonial punks embraced the more political strains of punk rock. They reject the imposition of cultural identities on the individual and instead seek to build up their own sense of identity based on their own lives and experiences. These punks have taken an inherently post-modern position in rebellion against the categories imposed on us all. This aspect of their rebellion was informed by their engagement with punk. Not surprising since, as I show in my new book, the subculture grew out of a longer history of youth and cultural rebellion against various aspects of modern society. Punk was often spun by the mainstream culture as “rebellion without a cause,” but punks brought pointed critiques of a society that many experienced as bigoted, greedy, cruel, and vapid. Post-colonial punk then reinforces the notion that punk can be much more than a genre of music, but a counter-culture invested in a critique of modern society aimed at making real world change, one listener at a time.

Mindy L. Clegg teaches history at Perimeter College at Georgia State University and is the author of Punk Rock: Music is the Currency of Life.

This post was also published here and has been reproduced with permission. 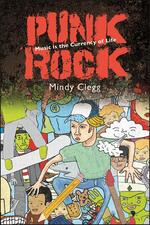 Music Is the Currency of Life